A bit about latvian blues band 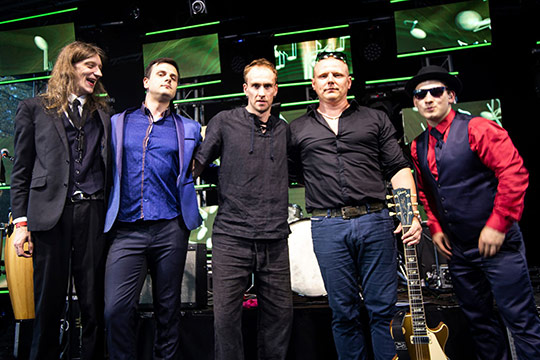 Early in 2000, the Canadian blues expert Johnny V recorded an album in Riga together with the Latvian Blues Band, and that was followed by a major concert tour of Canada that stretched from Toronto all the way to Calgary. This is seen as the beginning of the band’s career.

In 2004, the legendary guitarist and blues expert Bob Margolin published an article about the LBB as a European blues phenomenon in the world’s leading blues magazine, Blues Revue. In 2005, the LBB received the Thropees France Blues nomination as the best blues band in Europe.

In early 2009, the LBB issued its first studio album, Unreal. The producer was one of today’s most outstanding guitarists, Duke Robillard. The album received an excellent review from music reviewer Art Tipaldi in Blues Revue. Tipaldi is also chairman of the Keeping the Blues Alive foundation.

Also in 2009, the LBB won the Baltic Blues Challenge in the German town of Eutin, thus winning a spot at the International Blues Challenge 2010 finals in Memphis, Tennessee. For more than a quarter-century, the challenge has been organised by the world’s umbrella organisation for the blues, the Blues Foundation.

In April 2010, the band released their second album with 14 original compositions. This album was produced by band members Janis Bukovskis and Rolands Saulietis, with B-3 organist Raphael Wressnig appearing as a guest artist. The release of the album coincided with a special concert that the band presented to celebrate its 10th anniversary. The anniversary concert was released on DVD and CD.

In January 2015, the LBB once again took part in the International Blues Challenge in Memphis, gaining much attention and recognition from organisers, representatives of major US blues associations, as well as audiences. This year the band is celebrating its 15th anniversary and is continuing to perform actively in Latvia, Scandinavia and elsewhere in Europe.